Anyone who has ever bought a used car has probably considered how salty environment impacts metal. Salt acts as a corrosion agent, deteriorating metal, paint, and finishes. These salty conditions can have a similar affect on buildings. You can especially see this in coastal areas around the world. But at what the distance from the sea does salt subside? How many miles inland will salt air travel and corrode metal?

Sometimes the best way to answer these questions, is with a map.

The Galvanizers Association released a map that measures coastal distance and metal corrosion. While this map is particular to Great Britain, it’s also a useful resource worldwide to understand how far inland salt air travels for metal. Also, note that the data didn’t include Ireland until recently. This is why Scotland and England show higher corrosion, because for these states, the data goes back several decades. 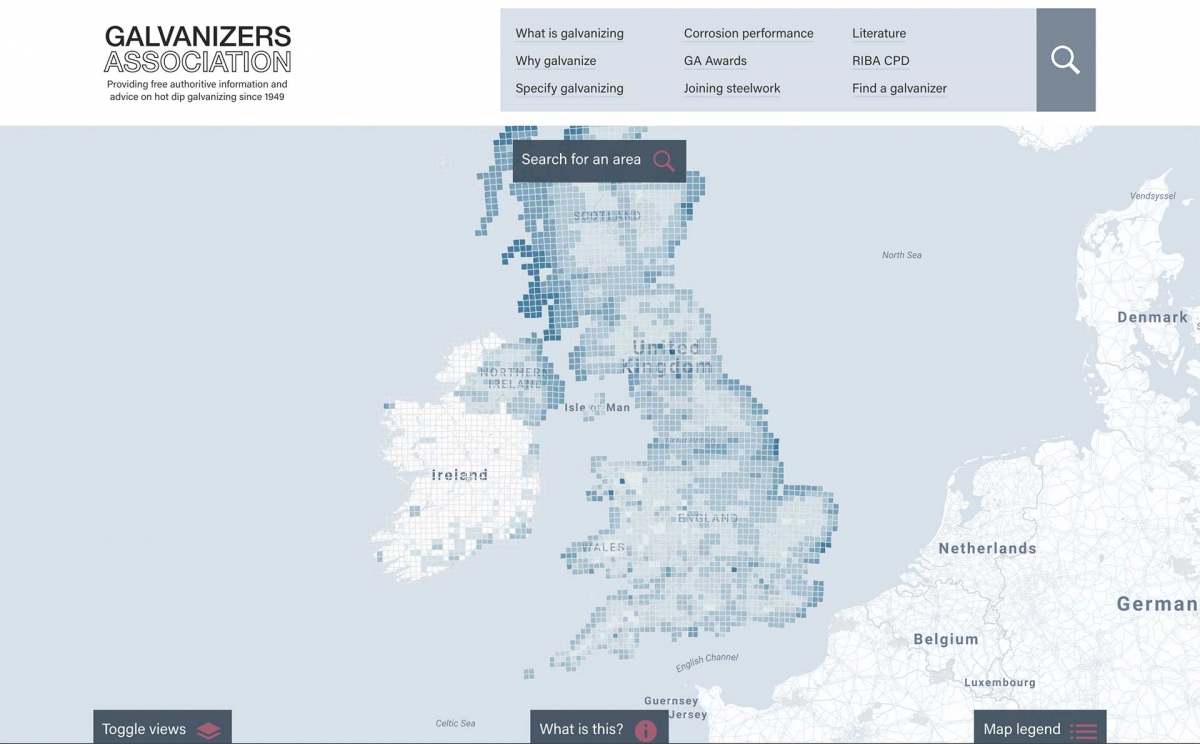 As you can see in the map above, rates of corrosion vary in different areas. This is because several factors influence the corrosion rate of salt air on metal. These factors include wind speed and direction, coastal topography, wave height and others. Each of these factors plays a role on determining the distance salty air travels.

In the map above, the rate of corrosion falls off at about 30 to 50 miles inland. Note that the map measures general corrosion rates for zinc-coated or galvanized steel. So the corrosion shows not only the effects of salt, but also industrial and urban pollutants. For this reason, you’ll see higher corrosion rates in more polluted industrial cities. Industrial areas such as Liverpool and Manchester get hit harder. (See the table below for more info on atmospheric pollutants.)

The map above gives a detailed view of coastal corrosion distance rates for metal. But what about the United States? Our company is based in Palm City, Florida. Due to wind speeds and other factors, this area is one of the most salty regions in the world. So we wanted to share a resource for understanding salt in local coastal regions. We researched the data for chloride-laden (salt) air in the USA and compiled the results below. 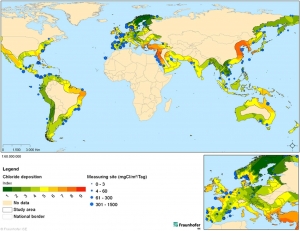 One of the most comprehensive studies we found reveals a world-wide map of salt air deposits. As you might have guessed, salt air is strongest around coastal areas. But some coastal areas get hit harder. Areas with high winds such as Florida will see deeper penetration of salt.

study by the Fraunhofer-ISE, research shows that chlorides (salts) deposit up to 1500 mg per meter.

Based on this study, most of America’s coast witnesses mild levels of salt intrusion. However, Florida receives the highest rate of salt penetration in the USA, even up to 100 miles inland.

The Fraunhofer-ISE put this study together to research salt’s effect on photo-voltaic panel systems. However, this research also benefits the metal building industry. Salt air will cause metals to oxidize, and acts as an electrolyte in galvanic corrosion.

Here’s another map — this time from the National Atmospheric Deposition Program. This study centers solely on the United States coastal salt deposition. Again, Florida shows deep penetration of coastal salt deposits, measured in kilograms of salt chloride per hectare. In Florida, measurements of deposits of up to 8.6kg per hectare, or 860mg per square meter.

The Effects of Compounded Corrosive Pollutants

As noted earlier, coastal salt air represents one of the corrosive atmospheric conditions. This pollutant will compound with other corrosive agents, especially in industrial, coastal cities. The chart below describes some of these other corrosive elements which affect metal building systems.

These atmospheric conditions can intersect to yield caustic environments. For instance, coastal cities such as Miami, Florida will experience a compounded effect. Coastal salts combine with urban pollutants to create a more corrosive environment.

You can look up the industrial zones on many city and rural zoning maps. For instance, the city of Miami publishes an interactive map which shows heavy and unlimited industrial zones. (These are indicated as IE-2 and IE-3, marked grey and dark grey.) Around these areas, corrosion rates will increase, compounding with the salt air.

“We were getting readings of 500 parts per trillion in Boulder,” Thornton recalled. The recorded salt levels turned out to be comparable to what the scientists later recorded on an ocean cruise.

His team’s research suggests that nitrogen oxides react with haze particles containing chloride at night. This reaction forms nitryl chloride, which in turn forms chlorine atoms, or salt, in the air. This condition occurs twice daily: once in the morning, and once in the evening. So it’s possible that even in non-coastal environments, salt can play a role in considering a building’s design.

Stainless Steel for Severe Coastal Environments provides guidance on how to identify these environments and provides practical advice and project examples. It also summarizes the findings of on-going coastal corrosion research in the Middle East. While the selection advice in this article is specific to stainless steel, severe environments can cause accelerated deterioration and unexpected failure of any susceptible construction material.

About the Author: Jason Poma

Jason Poma holds a Florida State Certified General Contractor License which he has maintained since 2003. He serves as the architectural liaison and qualifier for Poma and oversees the high-level operations of all current projects. Working in both the construction and architectural metals divisions, he is responsible for resource allocation and contract oversight.