Galvanic Corrosion: A Guide for Architecture

Everything you need to know about galvanic corrosion

If you’re a designer working with exterior metals, you’ve probably heard of galvanic corrosion. Also known as bimetallic corrosion, its a nasty but preventable condition.

Most architects know enough to be dangerous, but what exactly causes this breakdown? And what are the best practices for preventing it? Also, is it even a big deal?

We’ve put together this resource so that the next time a contractor tries to wave “galvanic corrosion,” around your head, you’ll know as as much as they do. 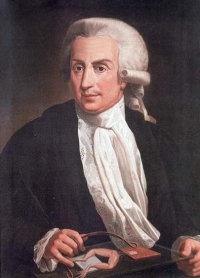 Luigi Galvini proved the existence of a biological electricity, or the galvanic current. Yet he didn’t coin the term. His rival Alessandro Volta thought Galvini’s science was bunk, and mocked the idea of “Galvanism”. The name stuck. And Volta’s name did, too — we still use “volt” to describe electromotive force.

And to answer our question: Yes galvanic corrosion is a big deal, but in many situations, you can cut the risk. Keep reading to learn when it matters and when it doesn’t. (Or scroll down for a mnemonic device for galvanic series to help you remember the most common metals.)

First, let’s define some of the terminology:

Nobility: Noble metals resist corrosion, while base metals tend to corrode. The use of the word “noble” in chemistry dates back 1906. Scientists borrowed the term to describe inert gases, or elements that don’t react. So think of a noble metal as having a high moral character — these metals stand their ground. Noble metals will not corrode against other metals.

Many forms of moisture including rainwater and seawater contain electrolytes, which serve as the conductor for galvanic corrosion. Imagery courtesy of 20th Century Fox.

Electrolyte: Substances that give ions when dissolved in water are called electrolytes. Most forms of moisture contain electrolytes, which are divided into acids, bases, and salts. Electrolytes act sort of like a wire connecting an electrical circuit between two metals, enabling galvanic corrosion.

Cathode (+) and Anode (-): When two metals make electrical contact, they each become polarized. This relationship is measured in volts. The positive metal acts as a cathode (receiving ions) and the negative metal acts as an anode (losing ions and corroding).

We’ll explore each of these concepts further, but first let’s look at Galvanic Series Chart. This chart will help you to determine which metals are more noble than other metals. 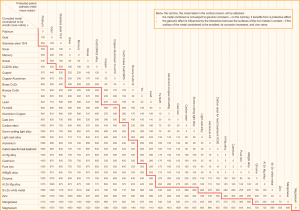 Most galvanic corrosion charts show a huge range of metals (pictured). You’ll probably never use the majority of these metals in an architectural context. Since we’re focusing on architecture, we’ve limited our chart below to architectural metals.

One more note about the chart. Notice that we’ve bolded five of the metals below. These five bolded metal groups represent 99% of the metals used in architecture today.

As mentioned, the table above is a partial listing of the galvanic series. Want to see more? Take a look at this much more comprehensive galvanic corrosion chart courtesy of LaClusienne.

Remember the galvanic action chart with this mnemonic device.

If you can remember the order of corrosion, you’ll have no trouble selecting ideal materials to prevent galvanic corrosion. Since the most common architectural metals fall into 5 categories, we’ve limited our device to Stainless Steel > Copper Alloys > Iron > Aluminum > Zinc.

Have you heard the story about how Stanley Couldn’t Iron Aluminum Zippers? He tried to iron them, but the whole story corroded and fell apart by the time we got to punchline. Haha. Okay. But in all seriousness, these are the most common metals to remember for architecture.

Here are some caveats:

Again, this abbreviated list is for practical applications. In other words, this mnemonic isn’t going to help you pass the ARE. Instead, its designed to help you in real world conversations about metal. But if you’re studying for an exam, you can find some good memory tools galvanic series mnemonics at the ARE forum.

Next, let’s talk about the basics of bimetallics.

The Four Conditions for Galvanic/Bimetallic Corrosion

In order for one noble metal to corrode a baser metal, first these four conditions must take place: 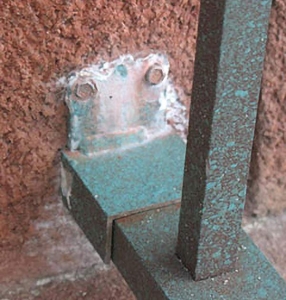 Galvanic corrosion on a railing.

While electrolytes exist in just about any environment, but there are exceptions. For instance, in dry or arid climates, galvanic corrosion is unlikely to occur. However, in most climates, moisture finds a way. Condensation forms even in the most watertight systems.

This is why most architectural systems contain inner channels for moisture. When water finds a way into your system, you want to give it a way out, too.

When Galvanic Corrosion is a non-issue

Remember how we said that sometimes galvanic corrosion is a non-issue? In some cases, this bimetallic corrosion rate is negligible. 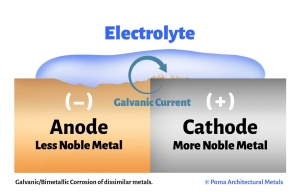 For instance, metals with a slight voltage difference will exhibit almost no corrosion when paired. Aluminum and zinc sit very close on the nobility chart above. The electrical difference creates a weaker current. The corrosion is negligible.

Another example: If two metals each have large surface areas, very little breakdown will present on the surface. Let’s say you’ve got a thick sheet of stainless steel sitting on top of a thick sheet of aluminum. Or a heavy aluminum tube connected to a stainless steel bar (see our Poma Pin). In each of these cases, the corrosion rate slows down to a crawl. This is because the large aluminum area spreads out the attack,. It has a thick skin, literally.

When Galvanic Corrosion is a BIG issue 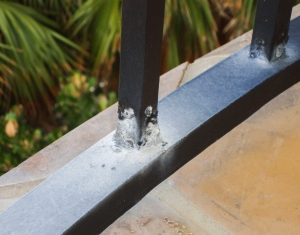 For instance, let’s say you’re building a stainless steel facade fastened with screws. If you select zinc-coated screws, the stainless steel will corrode the zinc with aggression. This is because the zinc-coated fasteners get attacked from every direction. Since anchors play such a vital role, this can cause structural failure. In addition, the white corrosion and rust trails will bleed down your building’s skin in the process. Not pretty.

Therefore, the only time you would use zinc-coated fasteners on metal, is if your metal is the same or similar nobility. For instance, aluminum is close to zinc on the galvanic series, so it won’t exhibit much corrosion. Finally, to completely stop corrosion, choose matching metal anchors. Zinc on zinc is a pretty safe bet.

What is the Minimum Distance between Metals to avoid Galvanic Corrosion?

Under normal conditions, galvanic corrosion only occurs when metals make contact. But in some situations, a galvanic current may form at greater distances.

In a study published in the Journal for American Water Works Association, researchers tested electrically insulated pipes for corrosion distance. They varied the distances of lead and copper tubes which were isolated by a plastic coupling. Even at twelve inches apart, the tubes exhibited a galvanic current at 20% of the typical corrosion rate. 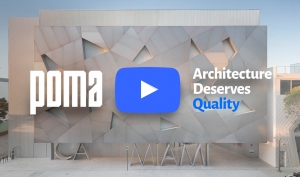 Learn what we mean when we say Architecture Deserves Quality.

To be clear, this is not a common condition. This pertains specifically to piping for MEP systems. For most architectural uses, you won’t insulate the metals and run water between them. For galvanic corrosion to occur under most conditions, the materials must either be touching or fractions of an inch apart.

There are two reasons why you might want to consider the direction of water flow on a system.

Second, when metals corrode, they bleed. While this might seem obvious, water typically moves downward, and takes any loose bits of corroded metal with it. When designing systems, specify anodic metals downstream of cathodic materials.

Remember that galvanic corrosion only occurs when an electrolyte completes the circuit. So let’s look at how coating the metal can reduce this breakdown.

Anodized aluminum is one way to break the circuit and thus prevent galvanic corrosion. When you anodize aluminum, it forms a thick coating made up of aluminum oxide. This protective layer is a thousand times thicker than aluminum’s natural oxide. Even though it’s only a 1/10th of a millimeter, this barrier breaks the circuit and prevent corrosion.

Paints and/or coatings can also provide some protection against galvanic corrosion. But note that both anodization and paints have a weakness. If the coating wears away or becomes scratched, the metal could rapidly decay. For instance, say that your installer drills holes through the coated material. Doing so will expose the metal, and invite corrosion.

How to Reduce and Prevent Galvanic Corrosion

Let’s recap. To reduce or prevent galvanic corrosion, consider each of these strategies:

We hope you enjoyed this article. As suppliers of coastal rail systems, we replace a lot of failed railing systems. In the process, we’ve encountered some of the worst examples of corrosion imaginable. And most of the time, these guardrail failures could have been easily prevented through proper installations. It’s our goal to educate our clients so that you make the best possible design decisions.

If you have any questions, don’t hesistate to reach out to our team. And make sure to subscribe to our email list and follow us on social media below. We’ll continue sharing great educational pieces and amazing project examples. We believe that architecture deserves quality, and we hope you do, too.

About the Author: Poma Metals

Poma Architectural Metals is an award-winning architectural glass and metals fabricator based in Palm City, Florida.